ISFIS strives to help school leaders and others understand the Iowa School Finance Formula.  More details are available for ISFIS Finance Subscribers under the Finance Subscriber tab, but below is general information on key terms and concepts we hope will benefit anyone interested in learning more about how public schools in Iowa are funded.

Larry has recorded a YouTube video explaining the basics of school finance. This video and the accompanying PPT can be used to inform new board candidates about school finance, be used as a refresher for current school board members, and offered to anyone else in the district interested in how the formula works. These resources can be used with all school board candidates in the summer preceding the regular school election (odd-numbered years), at a school board workshop, a board meeting, and on your website. In other words, please feel free to use it in any way that serves the interests of your district. Some districts use the video and PPT to go over the information slide-by-slide and have a discussion with potential board candidates.

What Urban Leaders need to know about Iowa School Finance.  View the recording of our Dec 2019 webinar for Urban School Leaders and download the related PowerPoint presentation to follow along.

Below are a number of key terms, definitions and measures of a school district’s financial health.  Or, view this printable version of the Key Measures of Financial Health below. (Updated 2022)

Since spending authority is generated on a per pupil basis as set by the legislature, the only way for school districts to gain additional Unspent Budget Authority is to reduce General Fund expenditures relative to General Fund authority. School districts have little ability to increase spending authority since the legislature determines the per pupil increase in spending authority, known as state supplemental assistance. Beyond that, a school district may impose an Instructional Support Levy (most have already done that), pursue every avenue of claiming additional Modified Supplemental amount (spending authority) for on-time funding for enrollment growth, Budget Guarantee for enrollment decline, Dropout Prevention, English-Learner Authority, or an additional Modified Supplemental amount for unique and unusual circumstances. Grants or federal funding, considered as Miscellaneous Income, also create dollar-for-dollar Spending Authority when the funds are actually received. School boards can set goals or parameters around Unspent Budget Authority targets to clarify their level of comfort with a specific range of Unspent Budget Authority.

Solvency Ratio is a calculation used to assess financial health. The calculation measures the relationship of ending uncommitted fund balance to revenues as a percentage for the fiscal year:

The Solvency Ratio is a snapshot point-in-time measure of the percentage of revenue remaining, assuming the district closed its doors on June 30 of the fiscal year, after gathering all the year’s revenues and paying all the year’s obligations. A district can only impact its solvency ratio by either increasing revenues or by reducing expenditures (or a combination of both). A district may choose to generate additional revenues through the use of the Cash Reserve Levy if they have not reached the statutory limit of 20% cash reserve relative to two prior years’ General Fund expenditures.

Districts with a history of comparatively high solvency ratios should consider whether local experiences compel a continued higher solvency ratio trend and if so, at what expense? Districts must consider competing issues. Do we need to spend more on learning opportunities for students? Do we need to lower the level of taxation for district residents? In other words, is our high solvency ratio indicative of inadequate educational opportunities, taxation that is too high, or are we satisfied with the current positions in all of these areas?

An important caution: solvency ratio only relates to the relative fund balance of a district, so is not indicative of the spending authority position of the district. Many districts have experienced a negative solvency ratio for a number of years without any sanction from the Iowa Department of Education or State Board of Education.

The Iowa school foundation formula is driven by student enrollment. Both increasing and decreasing enrollment will impact a school district’s spending authority and need for expenditures. District leaders should consider short-term and long-term enrollment trends and contemplate scenarios for adjusting staffing and expenditures along the way. Trends in open enrollment (both in and out of the district) also directly impact the district’s revenues and expenditures and should be carefully analyzed and trended forward to anticipate the financial impact. In many cases of districts encountering financial hardship, local leaders have looked back to discover that staff reductions were not made along the way as enrollment declines continued over a number of years.

The largest expenditure of a school district’s General Fund is salary and benefits costs for staff. District leaders should anticipate a staffing ratio that results in personnel costs around 75to 85 percent of the average district’s budget. Even small increases in salary or benefits costs combined with declining enrollment will compound very quickly if staffing ratios are not maintained and staff costs creep up to over 80 percent. Districts should evaluate the trend in salary and benefit costs for the General Fund annually.

One way to detect expected staffing cost increases in advance is to carefully consider staff cost trends at the building level. Typically, elementary school staff costs are slightly less per pupil than the average cost per pupil, and at the high school staffing costs are typically slightly higher per pupil. Deviations to this pattern can help to point out differences, perhaps in the seniority or degree status of staff in a particular building. Understanding building-level staffing costs and anticipating sensible staffing ratios can inform district leaders and help in long-term planning, to maintain a healthy overall staffing ratio with less disruption than staff reductions made after the district is experiencing economic hardship. It may also help inform districts whether an early retirement plan may be utilized to reduce such expenditures or if natural attrition will deliver the expected staff ratio relative to the number of students anticipated to be enrolled.

School districts will typically learn how much new spending authority they will receive for the next fiscal year based on the October 1 enrollment headcount when the legislature sets the state cost per pupil percent of growth for the next school year (known as State Supplementary Aid or SSA). The Iowa Code requires the legislature to set the SSA rate within 30 days of the release of the Governor’s budget recommendation (typically completed by mid-February). This report has been historically referred to as the “New Money” report, although it isn’t money (cash or revenue), but instead is a measure of change in spending authority. ISFIS has titled this report the “New Authority Report,” and it can be found on the ISFIS Subscriber Website at www.IowaSchoolFinance.com. With the 101% budget adjustment in place, districts with declining enrollment must look one year beyond this notice of new spending authority in order to realize the impact of an enrollment decline. Historical looks at new spending authority and carrying forward trend lines for long-term planning can go a long way towards helping school leaders plan for revenue and expenditure changes down the road.

Pictured below, download this ISFIS School Finance Graphical Diagram showing sources of funding and allowable expenditures under each of the various school district funds. This diagram is perfect for sharing with new board members or those running for public office to easily see the differences visually. (Most recent update Winter 2022.) 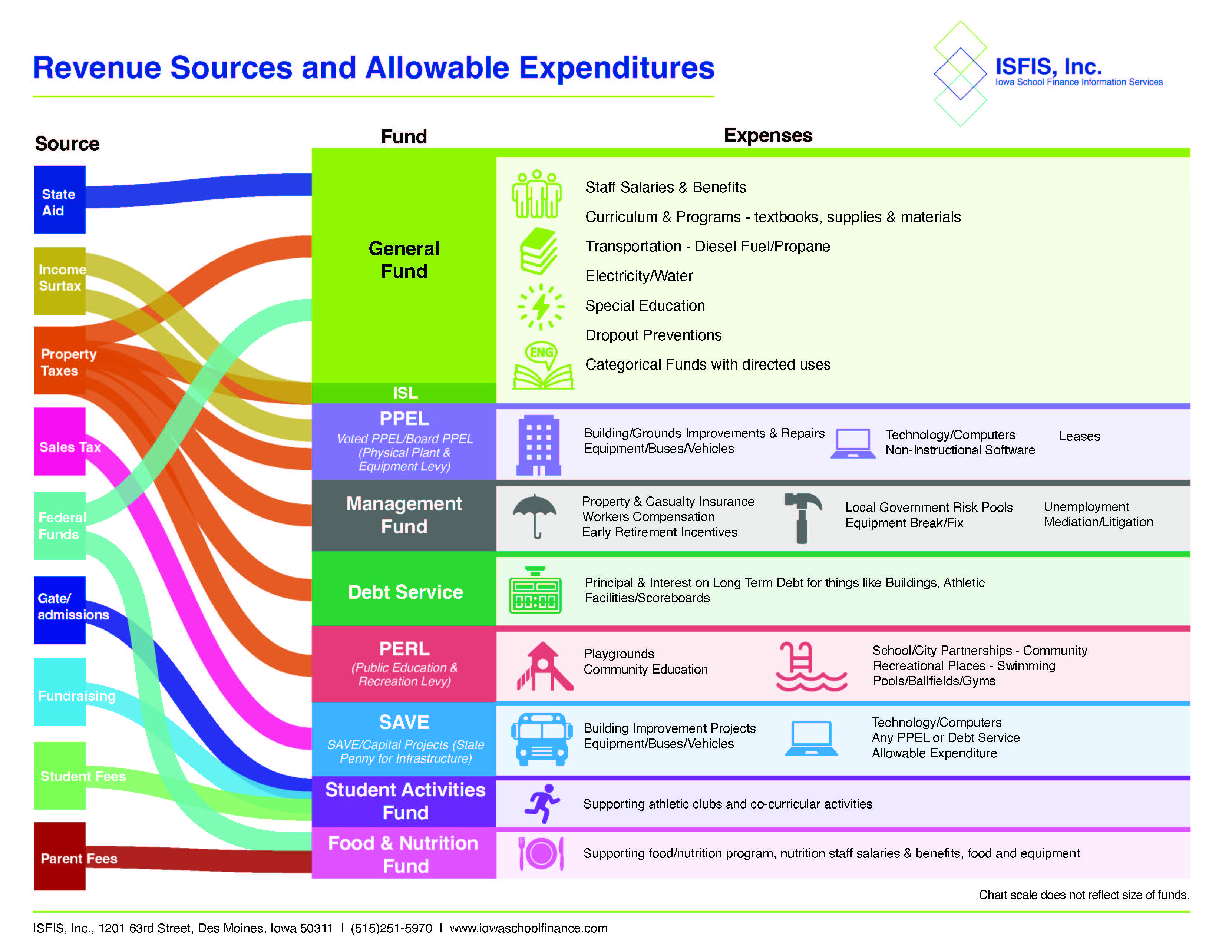 View this PPT with maps showing the free and reduced-price percentages by school district for each year from FY 2001 through FY 2023 from the ISFIS Interactive Mapping Tool.

This document provides detailed explanations by the Department of Education on school funding dated 2017, however predates local control expansions adopted by the Iowa legislature in 2017 and more recent legislative sessions.

ISFIS partners have decades of experience working with schools, in public policy, and data analysis. We’re here to share our experience and expertise with Iowa public schools through our mission to help schools elevate their output while lightening their workload. Learn more about ISFIS and what we do for Iowa schools.